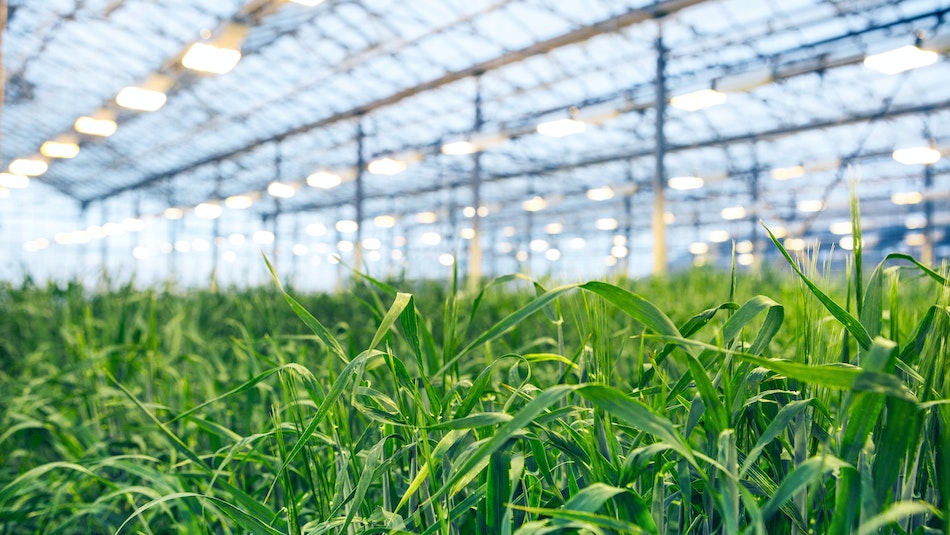 Not far from the small fishing village of Grindavík, you see the glow of the ORF Genetics greenhouse on an Icelandic winter morning long before you see the building. As you approach, the vast glass structure reveals what looks like a carpet of green inside. However, this is no ordinary grass but an extraordinary strain of bioengineered barley.

Abundant geothermal energy found on the Reykjanes Peninsula warms the 2,000 sq. m (22,000 sq. ft) eco-designed greenhouse and powers the artificial lights for maximum growth—when the winter sun sets low on the horizon. In neatly organized rows, ORF grows 130,000 barley plants (Hordeum vulgare) year-round using hydroponic cultivation in volcanic pumice instead of topsoil to minimize the risk of any contamination. While barley is one of civilization's oldest crops, ORF is exploring new and innovative uses for the barley grains to produce various human and animal-like growth factors.

It turns out that barley is an ideal plant to produce growth factors. It is a "closed-loop" pollinator, which means that barley pollen will not pollinate other flowering plants. Not even its neighboring barley plant! The lack of cross-pollination is crucial for growing a genetically pure product. Remarkably, ORF produces 25 different growth factors in their barley plants—all in a single greenhouse.

ORF Genetics has focused its efforts on human-like growth factors for stem cell research and the skincare industry. In 2010, ORF introduced its skincare brand, BIOEFFECT, featuring Barley EGF, the world‘s first skincare based on plant bioengineered growth factors. EGF, or Epidermal Growth Factor, is one of the most significant growth factors in our skin. It plays a vital role in collagen, elastin, and hyaluronic acid production for maintaining our skin's healthy appearance. BIOEFFECT has been an enormous success for ORF and is now sold worldwide. ORF develops and manufactures BIOEFFECT and its full range of biotech skincare products in Iceland.

In 2021, ORF Genetics will branch out from cosmetics to produce animal-like growth factors from its barley for cell-cultured meat and related industries. From an environmental standpoint, ORF's foray into cell-cultured meat stands to make a significant impact. As global populations rise, the demand for diets rich in protein increases exponentially while viable farmland is not. A meat-rich diet also takes a toll on the planet's water and habitat, not to mention the plentiful methane "off-gassing" from the animals themselves. Cell-cultured meat products could potentially alleviate many of these environmental stressors while delivering a safe, nutritious, and ethical replacement for meat. Cell-cultured meat can produce the exact meat substitutes that the markets demand, including specific "cuts" and fat ratios. In the future, popular cuts, such as rib-eye, could be made-to-order. Companies like ORF can even help substitute the harmful saturated fats in meats with healthier fats!

While it is hard to imagine a greenhouse in remote Iceland is a hotbed of biotechnology research and cutting-edge agricultural development, ORF Genetics is on track to fundamentally change how we develop, design, and create products that we use daily. Not bad for a small, privately-owned company that started in 2001!